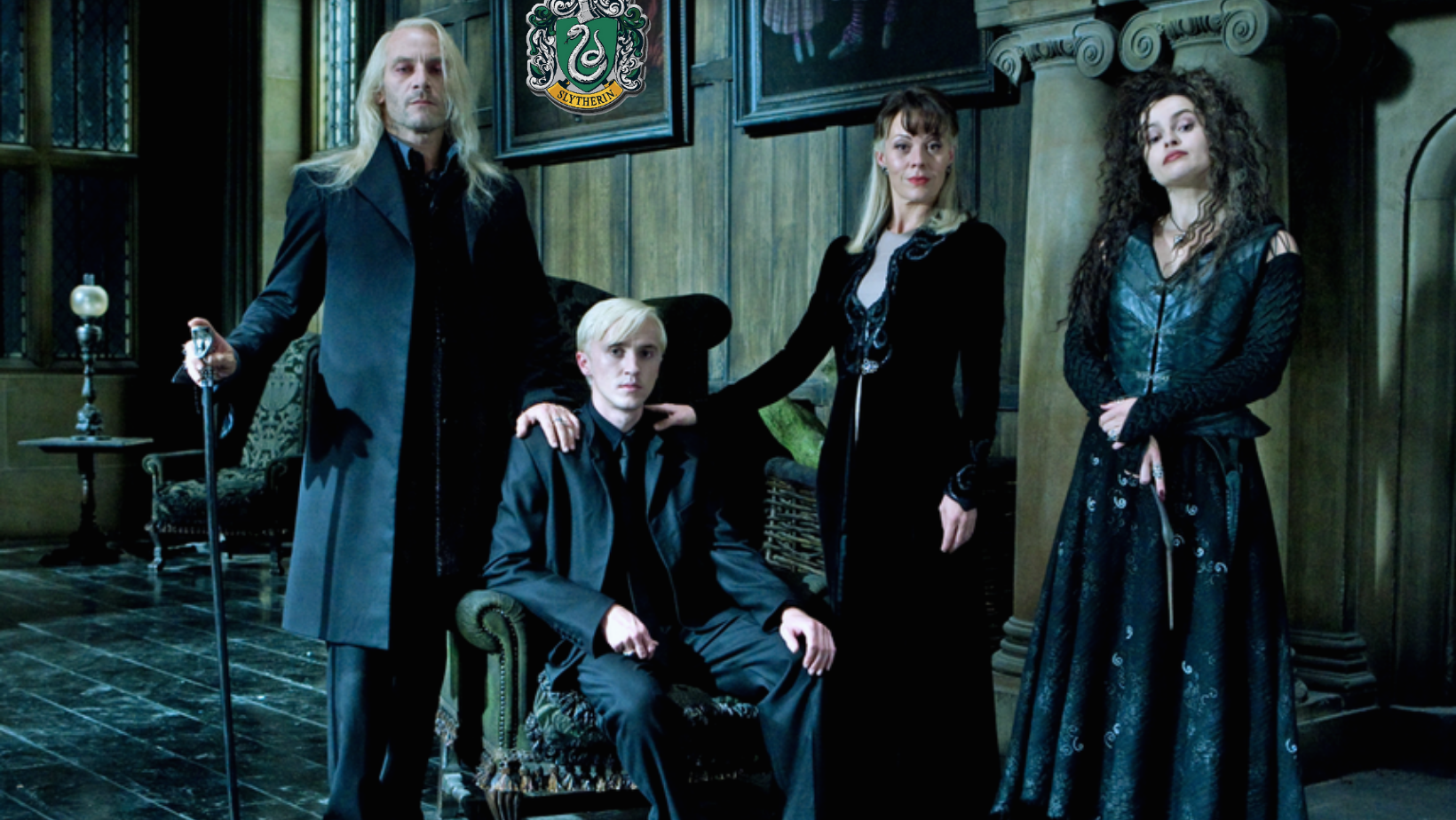 In the wizarding world, bloodlines are held in extremely high regard. Purebloods – families composed entirely of individuals with magical abilities – consider themselves the elite. They look down upon muggles, muggle-born wizards, and witches like Hermione Granger, and squibs. In other words, those considered to have tainted blood.

For purebloods like the Black family, the only thing that could be worse is a blood-traitor – purebloods who accept those with tainted blood and associate with such. This partly explains the bad blood (forgive the pun) between the Malfoy and Weasley families. The Weasley family tree covers the other side of this sub-plot.

This social order is crucial to the entire Harry Potter storyline. And with the Black family playing such a central role, understanding the Black family tree (which also turns out to be part of the Draco Malfoy family tree), is essential to appreciating the whole plot. 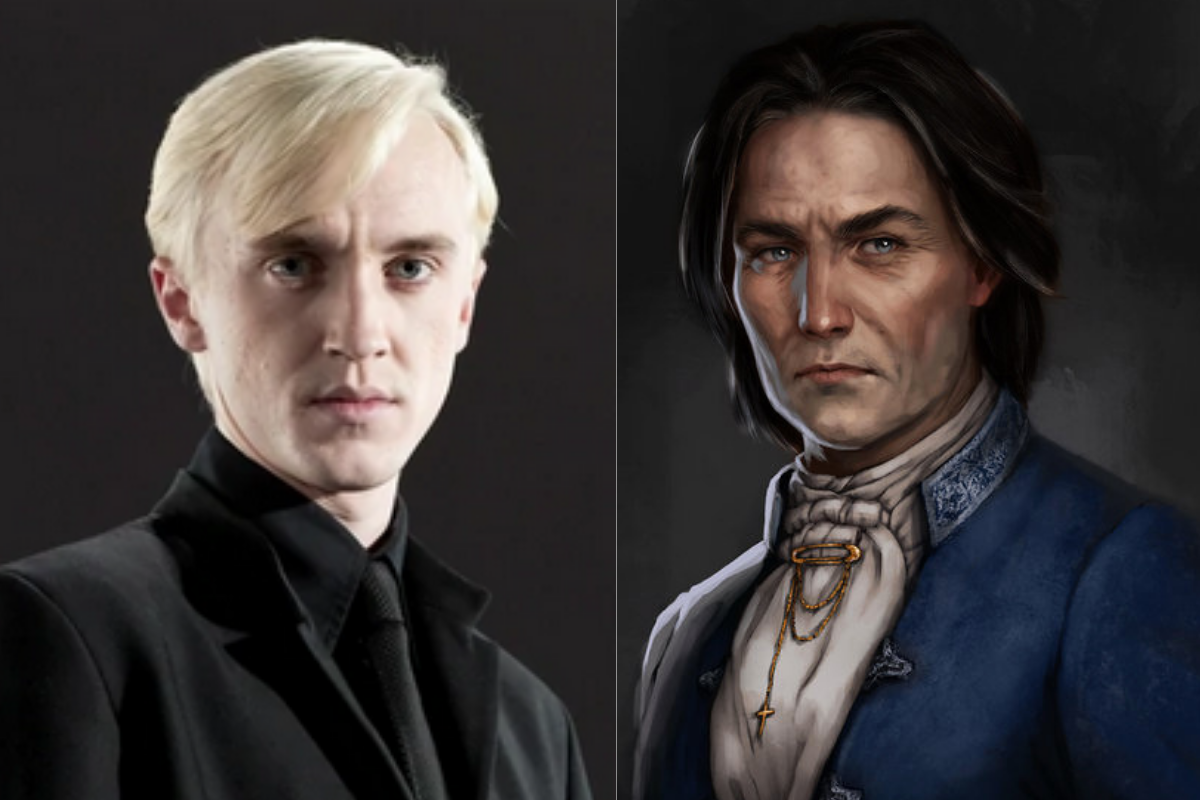 Pollux Black (1902 – 1990) was born to Cygnus Black II and Violetta Bulstrode. He married Irma Crabbe (1901 – 1989), another pure-blood witch and the first-born child of Joseph and Antoinette Crabbe.

Both Pollux and Irma attended Hogwarts from 1913 to 1920 and were members of House Slytherin. They courted while at Hogwarts, were married in 1922, and had their first child, Walburga, in 1925. They had two more children later in their marriage, Alphard and Cygnus, and seven grandchildren, among them the infamous Sirius Black and Bellatrix Lestrange.

Apart from being a respected member of Slytherin, Pollux was a member of Professor Horace Slughorn’s exclusive Slug Club. He went on to have a distinguished career, sitting on the Hogwarts Board of Governors, and rising to a high-ranking position in the Ministry of Magic. 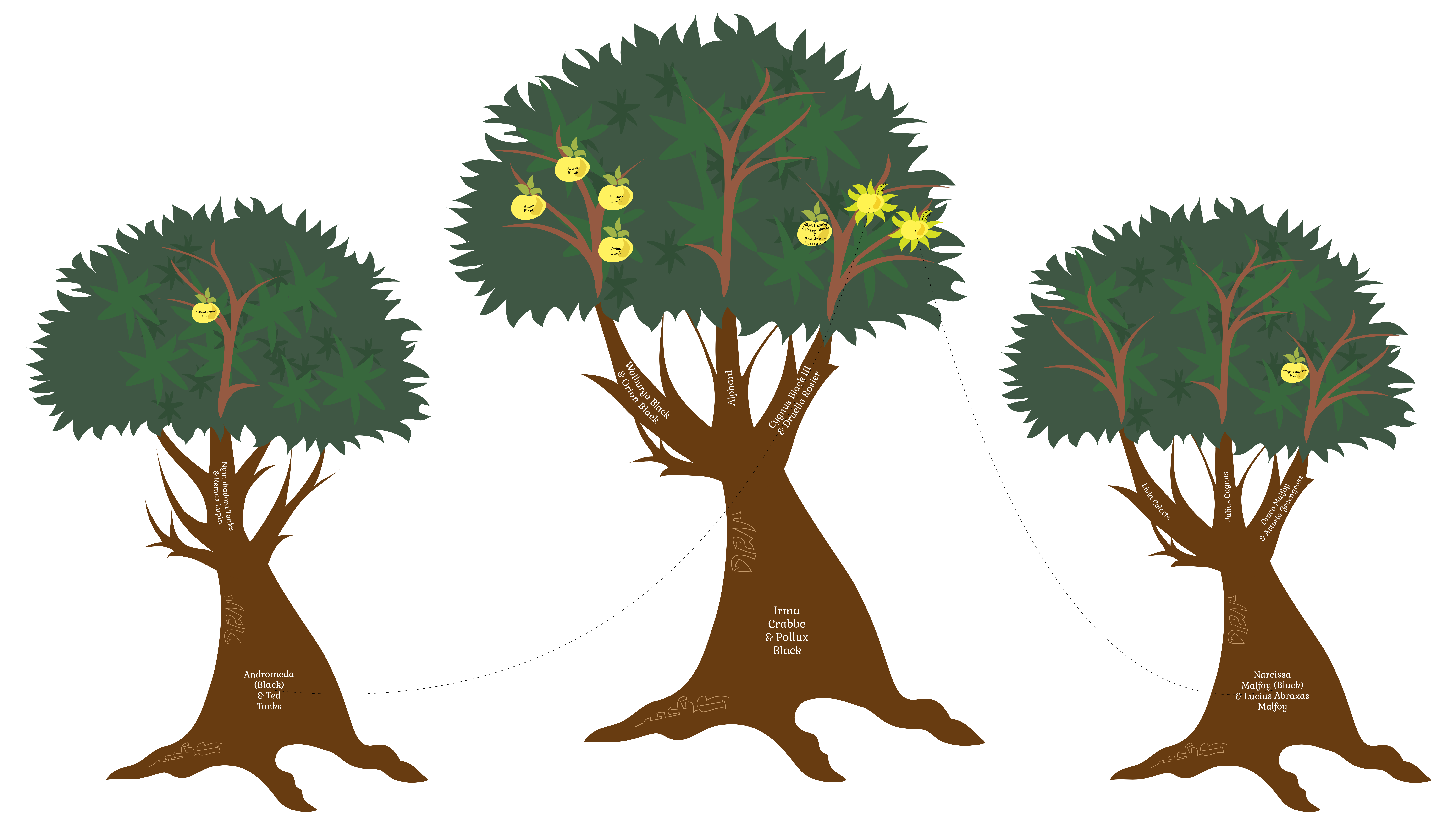 Pollux and Irma’s first-born daughter, Walburga, was born in 1925. She attended Hogwarts School of Witchcraft and Wizardry from 1936, and after graduating in 1943, married her second cousin Orion Black.

Orion himself attended Hogwarts from 1940 to 1947. Walburga, therefore, had to wait a few years to keep the family tradition of marrying only pure-bloods. However, their marriage only took place in 1958, a full 15 years after Walburga’s graduation. Orion is said to have been a reluctant groom. Stories suggest he agreed to the marriage only after threats from his father Arcturus, to marry him off to a nasty witch.

The couple had their first child, Sirius, in 1959. The child was named after his grandfather, Sirius II. Orion and Walburga had three more children, Regulus Black IV, Altair Black, and Aquila Black. Sirius would later be murdered by his cousin Bellatrix in the Second Wizarding War.

Orion and Walburga died in 1991 and 1994 respectively. They were both members of the family’s traditional house, Slytherin.

Alphard Black was the second child of Pollux and Irma Black, and Walburga’s younger brother. Alphard was born in 1929 and shared the unenviable distinction of being disowned from the family with his nephew Sirius. His elder sister personally blasted his name off the tapestry displaying the Black family tree. As Sirius recounted in Harry Potter and The Order of The Phoenix, this was because his uncle had left him some gold, in defiance of Sirius’ own disownment.

Alphard attended Hogwarts between 1940 and 1948. He was also a Slytherin, like his forebears. For most of his life, however, he struggled with hemophilia. The disease is said to have limited his development at Hogwarts. He died in 1977 at the age of 48.

Cygnus Black III was the third and final child of Pollux and Irma Black. He was born in 1938 and married Druella Rosier. Druella was a pure-blooded witch from the Rosier family, which was also one of the pure blood families that strongly believed in their superiority.

Cygnus Black III and Druella Rosier had three children, all girls. Bellatrix, born in 1951, Andromeda in 1952, and Narcissa Black, their youngest daughter, in 1955. The fact that Bellatrix was born when Cygnus was only 13 could be an error of calculation on Rowling’s part of a nod to the prevalence of teenage pregnancies in those years.

Bellatrix Black, born in 1951 to Cygnus Black III and Druella Rosier, entered Hogwarts in 1963 and was duly sorted into Slytherin. She is notorious for her cruelty and zealous allegiance to Lord Voldemort. Upon leaving Hogwarts in 1970, Bellatrix joined the Death Eaters – ardent followers of Voldemort who operated outside of wizarding law.

She too married a pure-blood wizard, Rodolphus Lestrange. Rodolphus came from a wealthy family and it is said that Bellatrix married him in keeping with family tradition rather than any true affection. Bellatrix was an incredibly cruel witch. In Harry Potter and the Order of the Phoenix, she happily offered to torture Ginny, the youngest of the Weasley children, while Harry and her older brother Ron Weasley watched.

Bellatrix and Rodolphus did not have any children.

Andromeda Black, the second child of Cygnus and Druella Black, was born in 1952 and attended Hogwarts between 1964 and 1971. She was also sorted into Slytherin.

Upon graduation from Hogwarts, Andromeda, much to the fury of her family, married Ted Tonks, a muggle-born wizard. Andromeda was subsequently disowned by her family and was completely cut off from them.

Andromeda and Ted had one daughter, Nymphadora Tonks, born in 1973. Nymphadora later became an Auror – a law enforcement official investigating dark arts. This put her fatally at odds with her aunt Bellatrix. Ted was killed in 1998 while on the run by Snatchers, Voldemort’s bounty hunters.

Nymphadora was born to Ted and Andromeda Tonks (née Black) in 1973. Nymphadora was a member of the Order of the Phoenix, a secret group of vigilantes set up by Dumbledore as a countering force to Voldemort’s Death Eaters. Nymphadora was also an Auror – a special wizarding law enforcement official trained to investigate and handle dark arts.

Teddy was a half-blood wizard who turned out to be, like his mother, a metamorphmagus – a wizard that can change their physical appearance at will.

Cygnus and Druella Black’s third and final child, Narcissa Black, was born in 1955. She entered Hogwarts in 1966 and graduated in 1973. She was sorted into Slytherin, like the other Blacks, and was first a prefect and then, later on, the head girl. 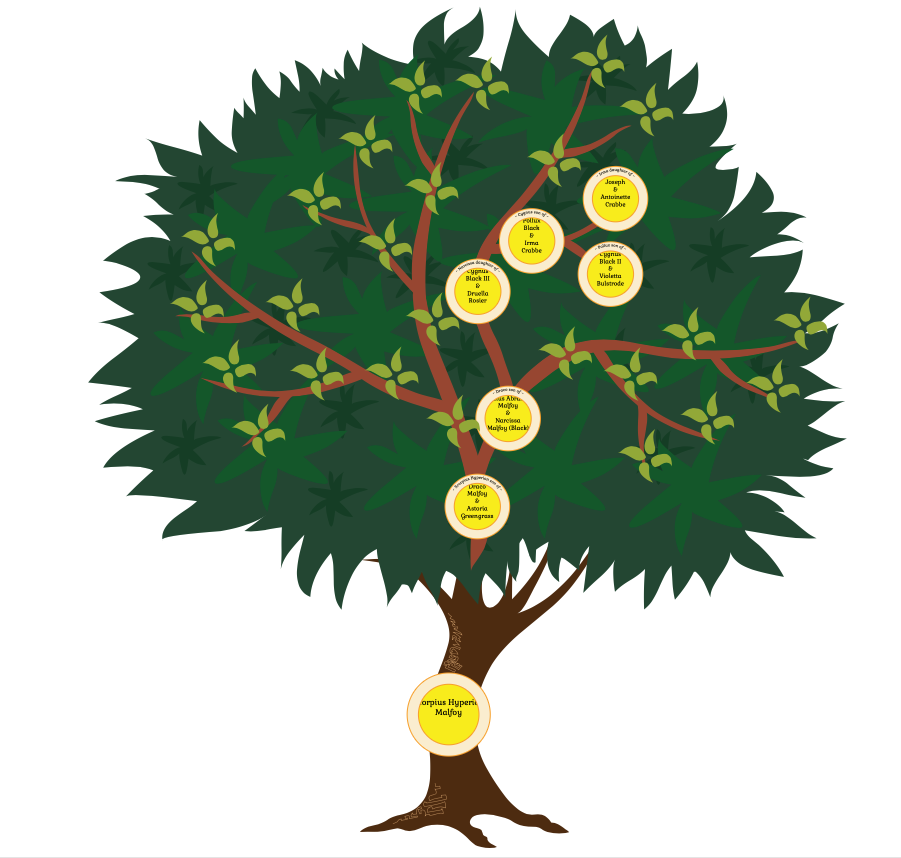 After graduating from Hogwarts, she married Lucius Abraxas Malfoy, in 1974. Narcissa and Lucius Malfoy had three children. Their first child, Livia Celeste, was born in 1976, but she died within a week of her birth. They had another child, Julius Cygnus, in 1978, but he was stillborn. Draco and the only one to survive, was predictably doted on by his mother.

Draco Malfoy, born in 1980, was the last-born child of Lucius and Narcissa Malfoy (née Black). His elder siblings both died in their infancy, and as the only surviving child, his mother was excessively protective of him.

Draco entered Hogwarts in 1991 and graduated in 1998. He, like the long line of Blacks before him, was sorted into Slytherin House. He became a prefect of Slytherin and in his fifth year, a member of the Inquisitorial Squad set up by Professor Dolores Umbridge. He also became a death eater, like his aunt Bellatrix, at the age of 16.

Despite his parents’ objections, Draco married Astoria Greengrass, a pure blood witch two years his junior at Hogwarts. They eventually had a son they named Scorpius Hyperion Malfoy in 2006.

Astoria died in 2019, succumbing to a blood curse that had been placed on one of her ancestors. Astoria chose not to teach Scorpius to hate muggles, something that did not sit well with her in-laws.

It’s the holiday season! So be it Thanksgiving, Hanukah, Christmas, Kwanza, or New Years, Treemily can help you create a stunning and personal present in minutes. And enjoy a 15% discount and Free US shipping on all orders through December 25th with promo code HOLIDAYS2021.