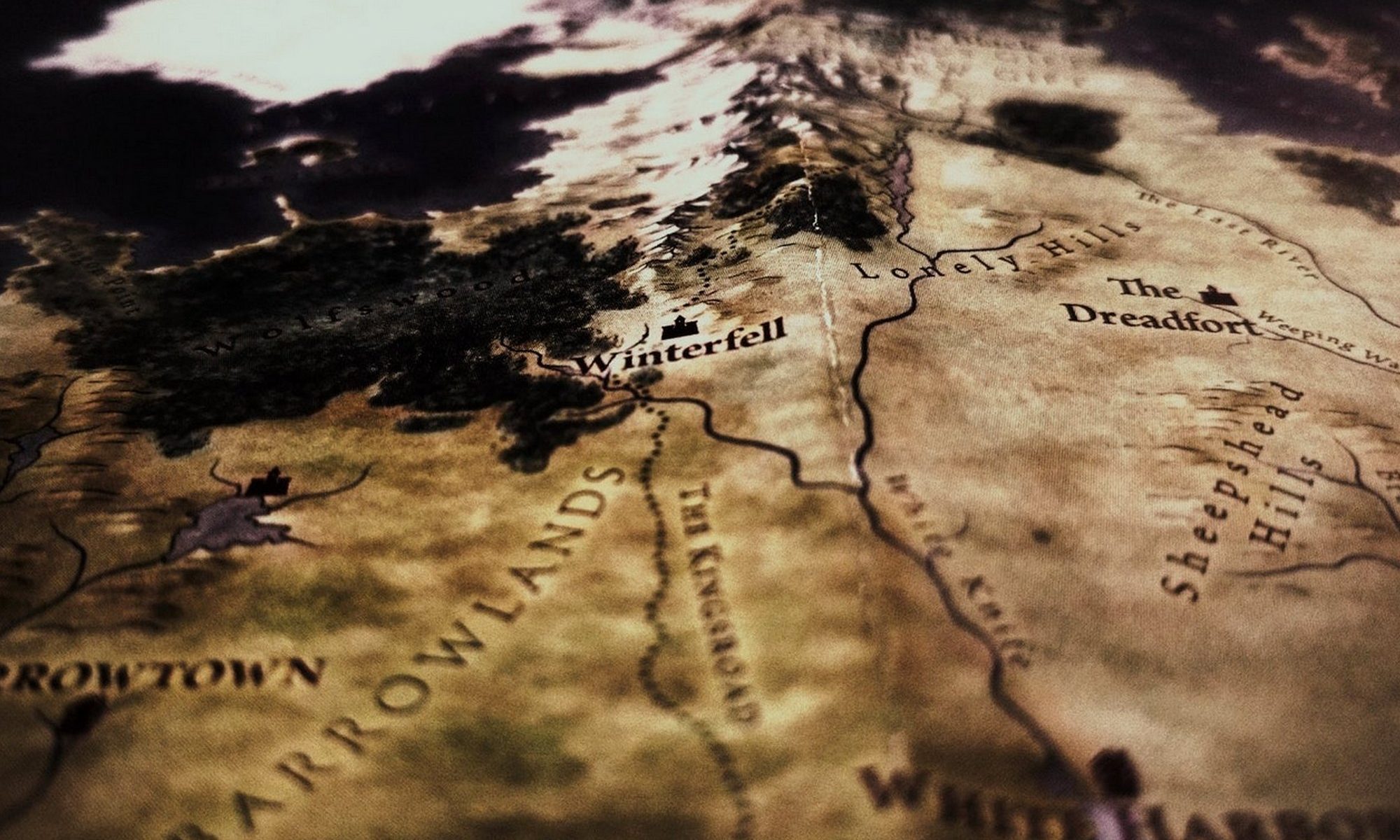 With all the marriages, complicated relationships, and secret children, the tangled web of houses and families in the popular Game of Thrones series can be confusing even for the biggest fans. Let’s take a look at the family trees of the surviving Game of Thrones houses made with the help of our online family tree maker and finally discover who on earth are Jon Snow’s real parents?

Some quick background: a few years before the actions in the first season take place, Robert Baratheon and his supporters (including his friend, Eddard “Ned” Stark) overthrew Aerys “The Mad King” Targaryen and took the Iron Throne.

The children of Ned and Catelyn Stark are the key characters in the Game of Thrones family tree.

The Stark family lived in the North of Westeros. Lord Eddard “Ned” Stark and his wife Catelyn (née Tully) had five children:

Along with these five children, Eddard and Catelyn also brought up Theon Greyjoy and Jon Snow. Theon’s father had been raiding villages in the North, and Robert Baratheon and Eddard Stark’s troops forced him back to the sea, and Eddard took Theon to guard Westeros.

The couple also reared another boy, Jon Snow, thought to be Ned’s illegitimate son. Ned never revealed the identity of Jon’s mother and the circumstances that led to Jon’s birth. Even Catelyn wasn’t told the truth, and she was always displeased about the boy.

The series barely mentions Ned Stark’s father and siblings. All we know is that years before the events we observe in the series, Ned’s sister Lyanna, was abducted by Prince Rhaegar Targaryen.

Ned’s father Rickard and brother Brandon demanded Lyanna’s release from the king’s court but both were killed by Aerys “The Mad King” Targaryen. This led to Robert’s Rebellion and Lyanna’a death under mysterious circumstances. Ned’s younger brother, Benjen, became the Night’s Watch brother who guarded the Wall and kept White Walkers and Wildlings from crossing into the Seven Kingdoms. 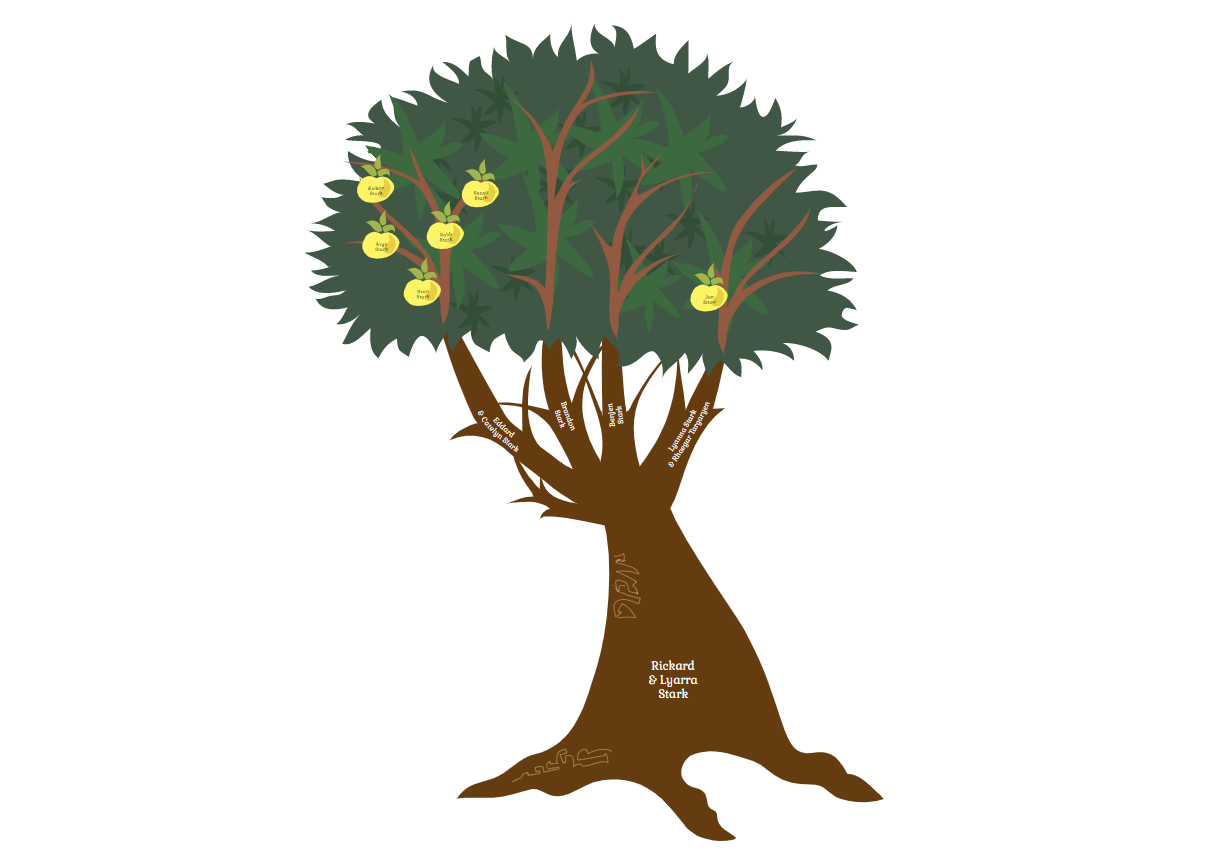 The rivalry between the Stark and Lannister families is an important part of the series.

The powerful Lannister house was headed by Tywin Lannister. The family had a significant influence in King Robert’s court. There were three children in the Lannister family:

Cersei had three children: Joffrey, Myrcella, and Tommen, all thought to be King Robert Baratheon’s offsprings. 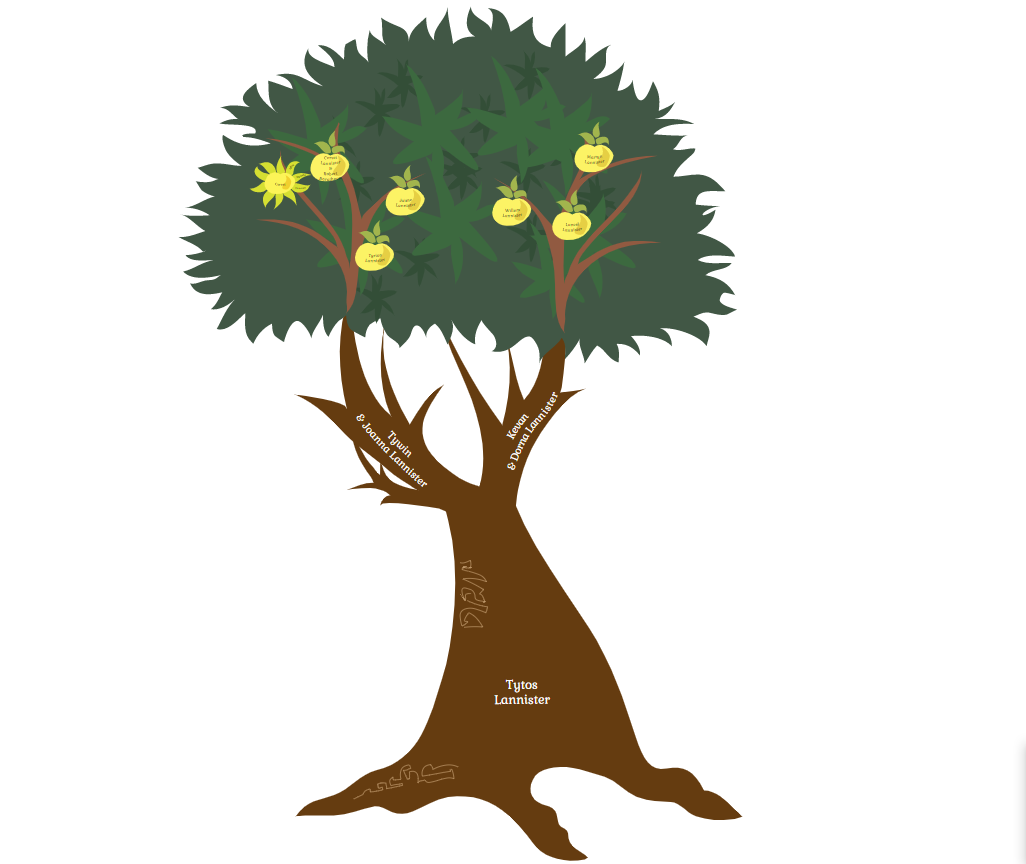 King Robert Baratheon governed Westeros since he and Ned Stark dethroned “The Mad King”. After the end of the civil war, he married Cersei Lannister. The couple had three children:

For generations, Baratheons had black hair, and the fact that Cersei’s children were blond raised many questions.

Robert Baratheon had two brothers: Renly and Stannis. After Robert’s rebellion, Stannis dwelt in offshore, while the light-hearted Renly served at Robert’s court. 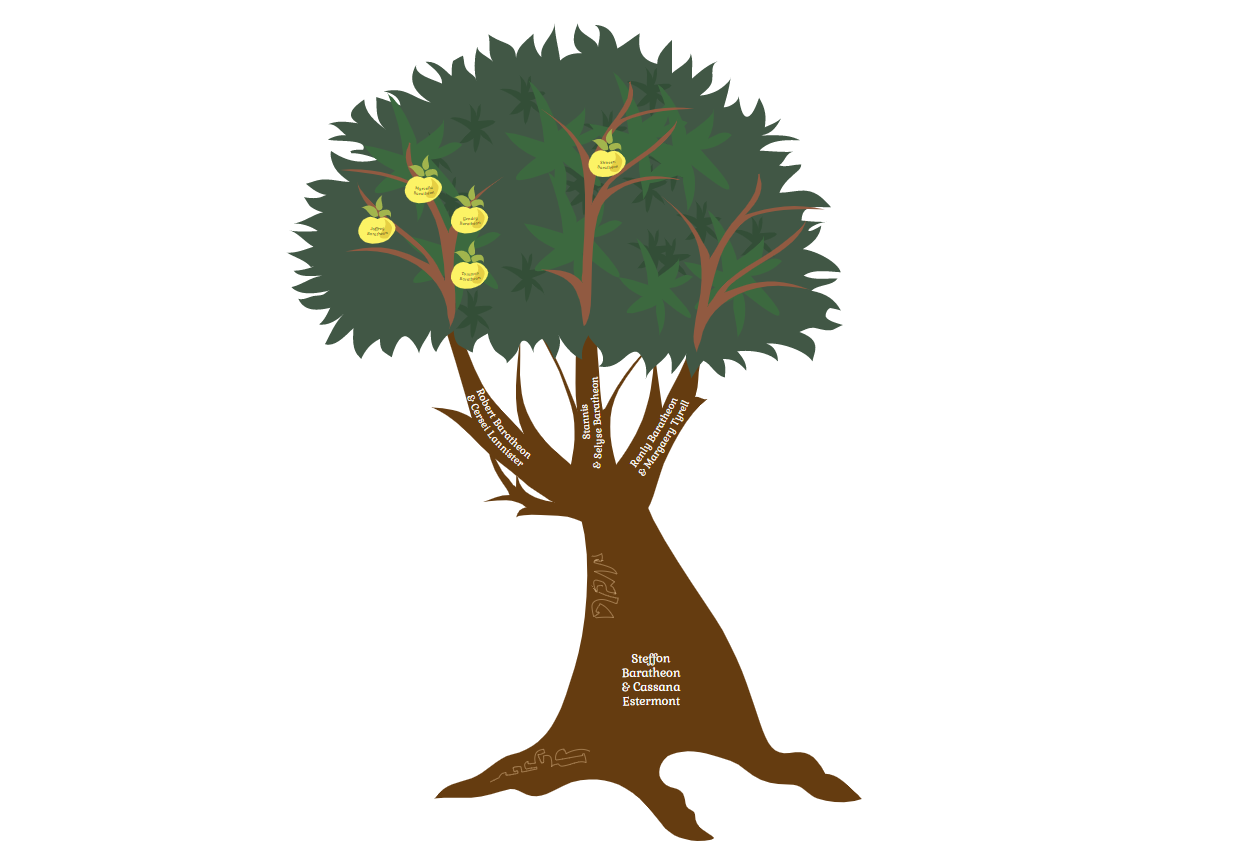 At the beginning of the series, Daenerys and Viserys were the only living representatives of the Targaryen clan. They were children of Aerys and his sister and wife, Rhaella.

Aerys and Rhaella had three children:

Rhaegar was the eldest son of the Mad King. He married Elia Martell, with whom he had two children: Rhaenys and Aegon. However, he secretly dissolved his marriage with Elia and married Lyanna Stark in Dorne.

All Targaryen family members were killed following Aerys’ overthrown. Viserys and Daenerys were ousted as infants.

Viserys claimed the Iron Throne after his father was killed in Robert’s Rebellion but never became the king because he was killed by Khal Drogo.

Daenerys was forced to marry Khal Drogo by her brother in exchange for military support. 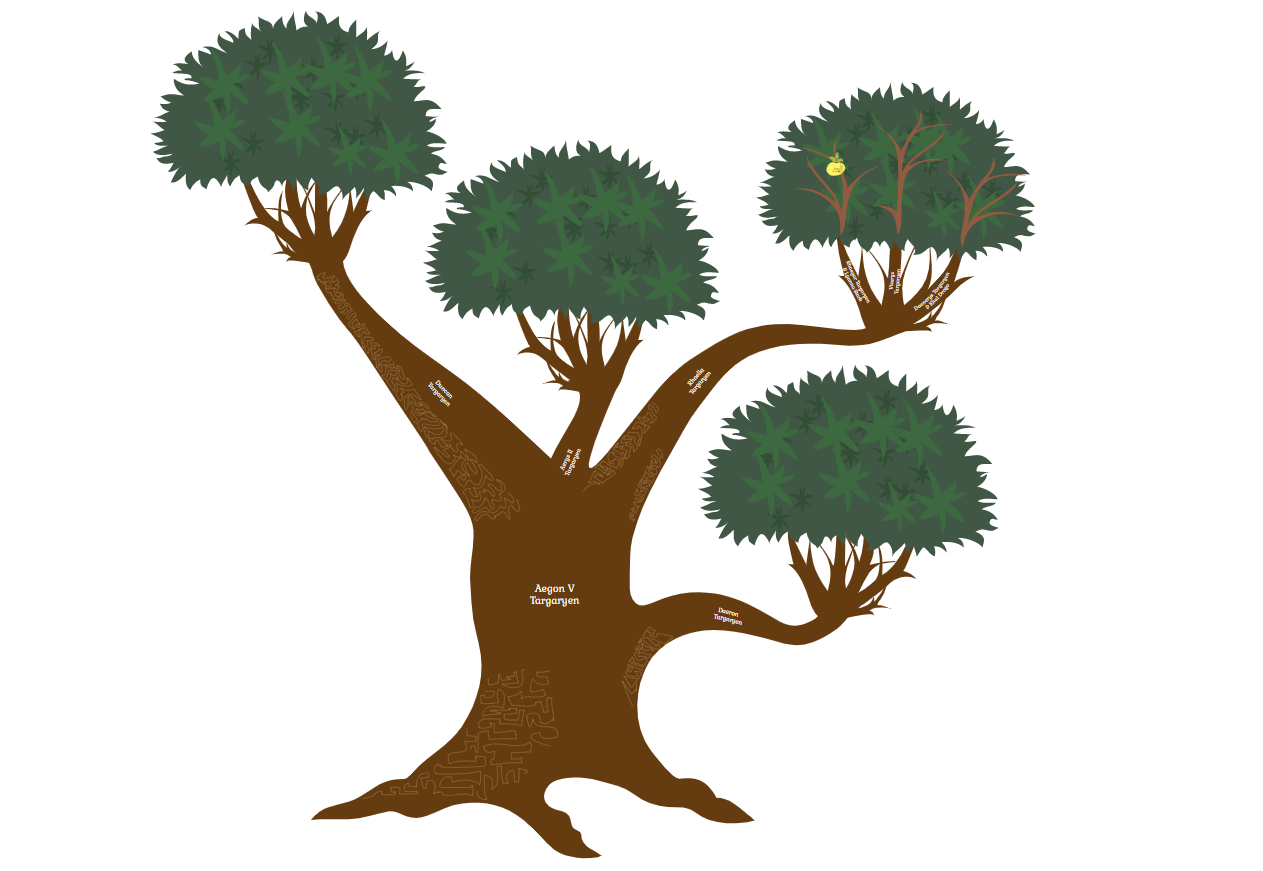 Lyanna’s kidnapping led to Robert Baratheon’s rebellion as she was betrothed to Robert. Rhaegar was killed by Robert in the Battle of the Trident. Eddard Stark found Lyanna at the Tower of Joy in Dorne where she was dying in childbirth. She asked Ned to keep safe and protect her child. To save the baby from Robert and his allies who wanted to destruct the House of Targaryen, Ned claimed the baby was his son and named him Jon Snow. The boy was considered a bastard and raised by Ned alongside his lawful children at Winterfell. Jon’s real name is Aegon Targaryen.

Still, Jon (or Aegon) belongs to the Stark family because Ned is technically his uncle. This makes Stark siblings – Sansa, Arya and – Jon’s cousins.

Game of Thrones probably has one of the most complicated plots in history, particularly with recent revelations involving Jon’s birth. We hope that our Game of Throne family trees have helped you sort out all familial ties. If you feel your ancestry is no less tangled, make use of our online family tree maker – it will help you systematize family branches and keep all research data organized. In case you feel you might have royal ancestry, read our tips on how to check whether you have royal blood.